Playing cards are well-known and widely used around the world, with practically every country claiming credit for their creation. The Chinese claim to have the oldest history of card games. The French claim to have standardised the card game and its forerunner, the tarot. And the British claim to have discovered the first verifiable record of a card game.

Many people now know how to play online poker or online blackjack, but few realise that a deck of cards is a work of art in terms of innovation, style, and history. Cards have been used as amusements, high-stakes bets, occult instruments, magic shows, and statistical probability models—and even as cash and a conduit for secret communication at times.

Decks of cards reflect idiosyncrasies of their origins as a result of this procedure. The names, colours, symbols, and designs of cards fluctuate depending on their origins and the preferences of card players. These tablets aren’t simply toys or utilities. They are cultural imprints that indicate common practices.

Origins and history of cards 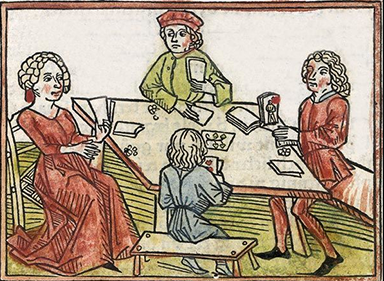 The origins of regular playing cards are clouded in mystery and speculation, yet they almost likely come from the East. Experts believe that scrolls from China’s Tang Dynasty mentioned a game of paper tiles (albeit they were more akin to contemporary dominoes than cards) and that this is the first recorded evidence of card play. A few late 14th-century European literary allusions allude to the abrupt introduction of a “Saracen’s game,” implying that cards originated in Arabia rather than China. Another theory claims that nomads carried fortune-telling cards from India with them, giving card games an even older history. In any case, commercial opportunities undoubtedly facilitated the spread of card games from the Far East to Europe since printing technology accelerated their manufacture across borders.

Drinking, wagering, and a variety of other vices accompanied card games throughout mediaeval Europe, attracting cheaters and charlatans to the table. Authorities outlawed card games because they had become so popular and disruptive. A 1377 edict outlawed card games on working days in Paris, according to historian Michael Dummett’s book The Game of Tarot. Across Europe, similar restrictions were passed as preachers attempted to regulate card games, believing that “the Devil’s pictorial book” only led to a life of wickedness. The crime of counterfeiting an ace was punished by death. The 4 traditional French suits of ages ago are still preserved in today’s 52-card deck: hearts, clubs, spades and diamonds. These visual symbols, or “pips,” show little similarity to the objects they depict, but they were far easier to duplicate than more elaborate themes.

What do the four suits in a deck of cards represent:

According to some historians, the 4 suits in a deck reflect the 4 categories of Medieval society. Swords (spades) the aristocracy or military, cups and chalices (contemporary hearts) might have represented the church, batons (clubs) peasants, and money (diamonds) merchants. The variation in symbols from one deck to the next, however, defies such categorisation. Early German “hunting cards,” for example, had bells. Because bells were frequently tied to the jesses of a hawk, a hobby exclusive for the Rhineland wealthiest, these pips would have been a more suitable sign of German aristocracy than spades. Diamonds, on the other hand, may have signified the upper class among French decks, as diamond-shaped pave stones were used in church chancels, and such stones commemorated the tombs of the aristocratic deceased.

Pips were widely changeable, but courtesan cards, now known as “face cards,” have stayed mostly constant for ages. The four legendary kings of the French and British decks, for example, are always the same: David, Charles, Alexander and Caesar. Queens, according to Bostock, have not always been treated with the same respect. Each of the four suites was alternately controlled by Rachel, Pallas, Judith, and Argine, with many interruptions.

According to the IPCS, the ace rose to popularity in 1765. In that year, England imposed a tax on the sale of playing cards. The ace was stamped to show that the tax had been collected, and faking an ace was considered a capital offence. The ace is still made to stand out to this day.

Now let us look at what the symbols on the cards represent?

A deck of cards has 52 cards, which are intended to represent the duration of a year in weeks. The thirteen lunar months are symbolised by the thirteen cards in one suit. The sum of all of the values present on the cards is 365. Each card’s value number corresponds to a term that describes the card’s personality.

What do the number playing cards represent?

Let us see what the cards of the royal family represent?

To be honest, the meanings of the cards have little bearing on the actual gameplay of any card games available at any online casino; yet, understanding such obscure details adds new and intriguing aspects to numerous card games.

Card games are played all over the world

Almost everyone loves playing cards. The gamblers, on the other hand, were instrumental for some of the most remarkable characteristics of current decks. Indian culture has traditionally included card games. Many card games, including bridge, poker, rummy, and Teen Patti, originated in India. Most of us have played these games at least once in our lives. Many people even have a deck of cards at homes that they use to pass the time in their spare time. A few rounds of card games with family or friends can undoubtedly help you relax, decrease tension, and improve your mood.

Card games are not only regarded as skill games, but they also have a strong emotional connection with humans due to the profound astrological characteristics hidden inside the symbols of cards.