Players always want to get some type of edge over the dealer when they are playing casino games, particularly in skill based games like Blackjack. The card shuffle tracking system is one of the most often used. It undoubtedly aids blackjack players in gaining an advantage over the house. The technique’s foundation is based on card counting system. They’re also utilised in conjunction with one another. The shuffle itself does not place the cards in a completely random order. People try to use this to their advantage while playing offline or online blackjack. Many professionals say it takes around 25-30 shuffles to arbitrarily shuffle a deck of cards.

What is shuffle tracking, and how does it work?

Some advantage gamers employ shuffle tracking when enjoying blackjack or other table games. These players attempt to anticipate the next cards to be dealt following a shuffle by observing how the cards are placed in the discarding tray and jumbled.

Shuffle tracking operates like this at its most basic level:

Even the most ideal scenario such as the example we just detailed, includes a variable. To make an exact forecast, you must understand exactly which pile has the initial card landing on the bottom. However, you can tell which of the 2 deck portions initiated the stack by looking at the initial few cards off the surface of the fresh shuffle.

Of course, real life throws up a slew of problems when it comes to keeping track of a shuffle. Because when shuffling a single deck by hand, the dealer virtually never has 2 stacks of twenty six cards and nearly never does a flawless shuffle in which precisely one card from every stack goes onto the last stack in just about every other card sequence.

However, some players are capable of identifying certain cards or groups of cards effectively enough via a shuffle to acquire an edge over the casino. However, shuffle tracking is one of the most difficult abilities for players to acquire.

As blackjack dealers shuffle cards, they use a variety of strategies. It also hinges on how many decks are used and how long it takes to combine them. In most online casinos, more than one deck of cards is used. Long shuffling takes time, which is not ideal. There are several sorts of shuffle tracking methods:

Hand-shuffled games are tough to track, yet many dealers are so sluggish that they really do not shuffle correctly or often enough, making it feasible to identify advantageous scenarios. But what about versions that shuffle the cards automatically?

Is shuffle tracking a good technique?

Shuffle tracking may be beneficial if you understand how to do it properly and can change the quantity of your wagers when a cluster of high value cards appear. However, if you make a mistake and increase your wagers at the incorrect moment, you’ll lose more money than if you just simply bet and follow basic technique.

In the end, shuffle tracking may seem more beneficial than card counting and several other advantage play strategies if done correctly. However, executing it successfully requires a lot of skill and effort, as well as a lot of money, so the long-term reward comes with consequences. 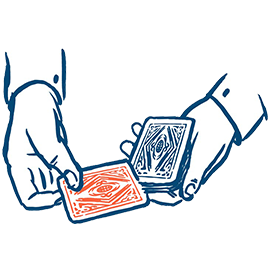 Insurance side bet at the blackjack table is one instance where regular players are unaware of the opportunity to minimise the house edge by employing shuffle tracking. You may be aware that insurance is really not a smart choice when utilising a basic approach. But it might be advantageous to take the insurance bet if you realise you’re in the centre of a bunch of face cards as well as the croupier has an ace showing.

The insurance wager is a two-to-one wager on whether the dealer’s downward card is a ten-valued card or not. It’s a solid wager if the odds of the dealer having a 10-valued card are greater than in this. In a case whereby the down card is selected randomly, the probabilities are poorer than 2 to 1, however, if you can take insurance when you know that the probabilities of a down 10 value card are stronger due to shuffle tracking.

Is it beneficial to try out the technique?

Shuffle tracking is among the most difficult ways for online blackjack players to get an edge. It’s more challenging than counting cards, and only a small percentage of individuals ever master it. However, the only way of finding out if you can accomplish it is to give it a shot.

Even if you don’t have the ability to employ shuffle tracking as the experienced players, you could be able to obtain a fast edge using the same principles.

Now it ought to be apparent after this section on shuffle tracking that it is not for everybody, but, you ought to understand that it is possible to observe a scenario where you can try to reduce the house edge occasionally even if you are not a full-fledged advantage player or shuffle tracker.